I had limited time to see Nijo Castle and decided to focus on seeing its gardens. The parklands and the gardens of the castle exist in harmony with its buildings. The castle is surrounded by a water filled moat and a wall. Inside it has a fortified keep surrounded by a similar moat. The top row of images in the panel below shows the outer wall, while the bottom row shows the fortifications of the keep. 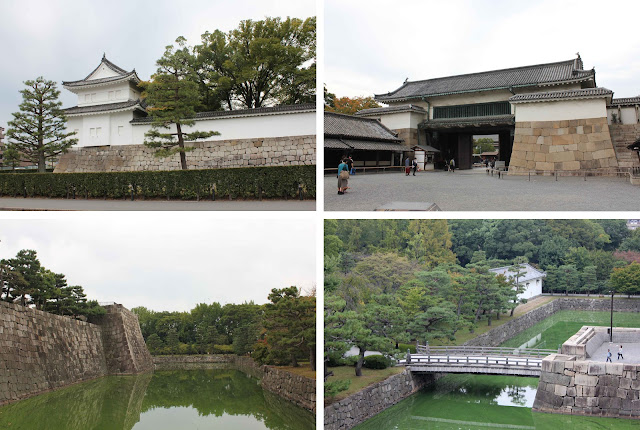 Nijo Castle’s gardens are situated between these two fortification lines. They provide scenic surroundings for the palace buildings. Images below show two of the most prominent buildings of the castle. Left image shows Ninomaru Palace and right image shows Honmaru Palace.

The buildings were impressive enough at a distance, but a closer look reveals exquisite detail too. Image below left shows a carved wooden panel above the Kurumayose entrance to Nimomaru Palace and image below right shows beautiful timber on the exterior of Honmaru Palace.

I already mentioned that castle buildings are well integrated into the parkland. Ninomaru Place is a good example of that. Images below illustrate how well it looks among the trees.

Nijo Castle houses two gardens of note. Both feature a pond with lots of rocks. One of them is Ninomaru Garden designed by tea master Kobori Enshu (images below).

The other garden is called Seiryū-en and it has been constructed only in 1965. It features two tea houses which are partially seen in the images below. Unfortunately, the tea houses were closed to public.

Most of the Nijo Castle grounds however are covered by parkland consisting of well-tended trees, shrubs and lawns. The park designer used lawns to create expanses of negative space, which frame trees and shrubs in a very pleasing way (see images below). This effect makes the landscape look bigger than it is. 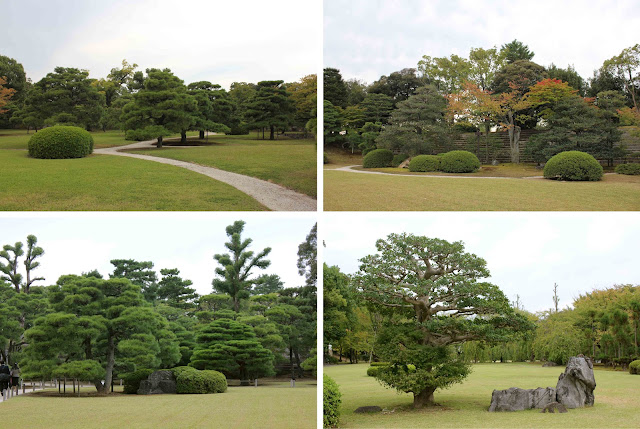 I would definitely go to Nijo Castle again, especially because I haven’t seen the inside of its palaces. It must be spectacular during cherry blossom, the turn of maple leaves or in snow and would make it a completely different experience.
Posted by Kigawa at 4:11 AM