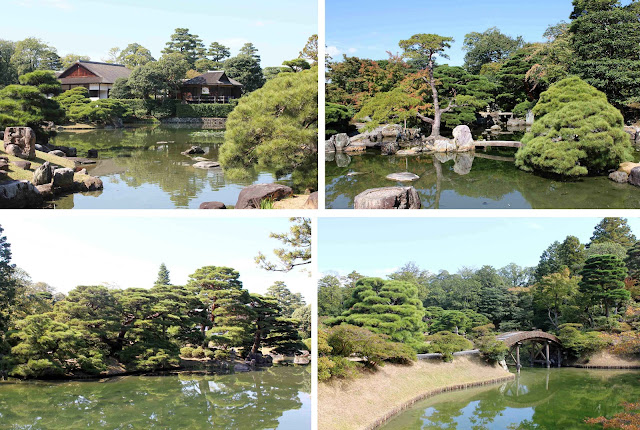 When I asked a Japanese landscaper what gardens I should visit in Kyoto, he named Katsura Imperial Villa first. So, I booked my tickets to go there the day I arrived to Kyoto. It is the most beautiful Japanese stroll garden I’ve seen so far. It was designed in the early 17th century by the Imperial Prince Toshihito and then considerably improved by his son Toshitada. All ponds, streams, islands and hills in this garden are artificial. The water is drawn from nearby Katsura River. Unlike many other historical properties in Japan, the villa had never been burned and the buildings retain their original form. Katsura Imperial Villa as a whole with its lakes, hills, trees and buildings, all in perfect harmony, strongly resonated with me. It’s a microcosm where Confucius’ ‘superior man’ could devote himself to scholarly pursuits such as calligraphy and tea. The villa also has a loan for Kemari football and archery, plus endless opportunities to work with the garden. It’s my kind of place. Images above and below show some of the garden views. 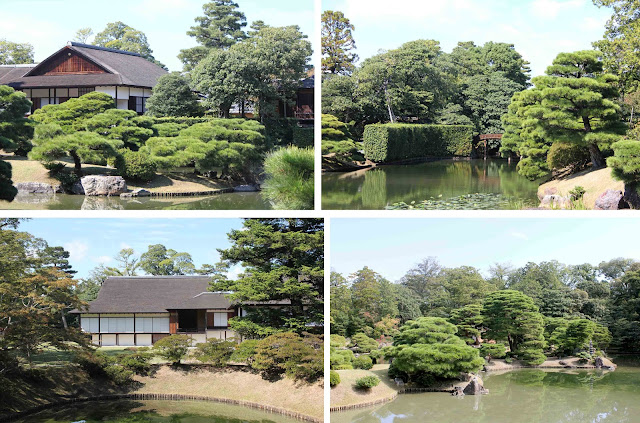 The garden has a couple of exquisite gates. One of them is Miyuki-mon gate with a Kiritsuma style thatched roof. Its roof is reinforced with bamboo rafters and supported by oak logs with the bark still on (see images below). It was built in the mid-17th century to honor a visiting retired emperor. The rightmost image is showing a different gate called Chu-mon.

The first tea house we saw was Shoka-tei (two leftmost images below). It is located on an island and placed on top of the highest hill in the garden. It is the smallest and the least formal tea house of the villa. Shoka-tei imitates a rustic tea stall on a mountain pass.
The rightmost image below shows the Soto-kashikake arbor (waiting place for tea ceremony). All structural timber of the arbor is logs with the bark and most of them are not straight. The floor is paved with large stones of irregular shapes. A little cubicle on its left side is the ‘sand toilet’ or sunazetchin, which is an arrangement of stones in the sand, and it is there for purely decorative purposes.

The most gorgeous tea house of the Imperial Villa is Shokin-tei (meaning ‘pine-tree-harp’). The building is so exquisite that I could have spent a day scrutinising it in detail (images below say it all). Apparently, Shokin-tei is the most prestigious place in Japan to hold a tea ceremony. Unfortunately, I couldn’t take good photos of it, because my view was continuously blocked by people of my tour group and the security staff wouldn’t let me stay behind. Shokin-tei is surrounded by water from three sides and its ichi-no-ma room offers the best view of the garden. Tea houses are not supposed to have splendid views, and I applaud the designer for disregarding this rule.

The next tea house we saw was Shoi-ken. It is a farm residence converted to a country style tea house (images below). It is not as glamorous as Shokin-tei, but it’s alluring nevertheless. Its charm lies in little features like round windows above sliding doors, different materials used for each door sill, combination of thatched and shingled roofing. A rice field maintained at the back of Shoi-ken is a thoughtful reminder of its agricultural past.

The last teahouse we saw is called Geppa-ro, which means ‘house of the moon and ripples’. As suggested by its name, it was designed for viewing the moon’s reflection in the pond. See images below left to right: Geppa-ro viewed from the east, kitchen room, central room (naka-no-ma), first room (ichi-no-ma), northern side of Geppa-ro exterior. Most of Geppa-ro’s rooms don’t have ceilings, instead, the bottom of the roof is decorated with panels made of bamboo and reed.

The actual ‘villa’ of the Katsura Imperial Villa is a series of four connected shoin buildings. Images below show them from left to right: Shin-goten, Gakki-no-ma, Chu-shoin and Ko-shoin. The rightmost image shows the moon-viewing platform of the Ko-shoin builing which offers an amazing lake view. The design of these buildings is dominated by straight lines, square angles and black and white colours, which make them look quite modern. It is not a coincidence – traditional Japanese architecture had a profound influence on contemporary architecture.

Images below show Okoshiyose entrance to shoin buildings shown above. Its courtyard garden is designed around a Tatami-ishi paved path, which was the first of its kind at the time of construction. This paved path is the main focal point of the garden (images below). Unfortunately, I haven’t taken any good photos of the path, but I was able to make a digital drawing of it (see the image below). The stones are superbly arranged in perfect balance between order and disorder (just like most things in life).

The garden actually has a delightful array of formal, semiformal and informal paved paths or nobedan as well as stepping stone paths. A selection of them is shown in the images below.

The pond of Katsura Imperial Villa has a highly irregular shape with a number of islands. This allowed the designer of the garden to incorporate a considerable number of bridges. Images below show just a selection of them. Some of them are made of stone, some of timber, but my favorite were earthen bridges (two rightmost images below). I’ve never seen them before and was very impressed by combination of textures (moss, sand, timber) and their graceful shape.

The garden features many stone lanterns (see images below). The majority are of less formal Oki-dōrō and Ikekomi-dōrō types (movable lantern and ’buried’ lantern). The leftmost image in the top row is a famous example of Yukimi-dōrō type of movable lantern. The rightmost image in the bottom row shows an Oribe-dōrō type of ’buried’ lantern with inscription ‘F. I. L. I.’, which is a Latin acronym for ‘My son Christ’. In a small courtyard garden, a lantern can be the main focal point, but in a large stroll garden like Katsura Imperial Villa they are used as accents. A lantern in a particular spot may imply “look at the view” or “your destination is here” or even “watch your step”.

One thing that caught my eye even before I entered the villa was different types of bamboo fencing. Some of them are shown in images below. The leftmost image shows Sasagaki hedge. It is made by bending and braiding bamboo to form a hedge. The second leftmost image shows Hogaki fence. It is constructed by piling bamboo twigs between bamboo posts and securing them by a black rope. Sasagaki hedge and Hogaki fence are unique to Katsura Imperial Villa.

There were also a few stone basins. Images below show some of them. All filled with sand, I presume to control mosquitoes. The middle image shows a bowl-shaped basin which used to be a part of stone lantern. The rightmost image shows a sickle-shaped stone basin.

If Katsura Imperial Villa were the only thing to see in Japan, it would've been still worth the trip.
Posted by Kigawa at 5:13 AM

The pictures are stunning!

How hard was it to get permission to enter Katsura? Also, what time of year and how many days in advance? Thanks.

I booked it at the Imperial Household Agency office located at the Kyoto Imperial Palace. If you are in Kyoto for a week than you should be able to get a booking for one of the days.