My visit to Kodai-ji temple in Kyoto

One year ago in Japan, I made an impulse decision to visit Kodai-ji temple in Kyoto. My Japanese friends thought it was a bit of an odd choice. However, I already knew that no place of cultural or historical significance in Japan can disappoint me. There was no surprise and Kodai-ji was quite impressive. And now, you have to endure another blog post about zen gardens and teahouses, just because I don’t have anyone to talk about it.

Kodai-ji owes its existence to some of the biggest names in Japanese history. It was built in memory of shogun Toyotomi Hideyoshi by his widow Nene. The construction was financed by Hideyoshi’s successor shogun Ieyasu Tokugawa. Tokugawa killed Hideyoshi’s only son and heir apparent whom he swore to protect. I have no doubt that Kodai-ji is partly a result of Tokugawa’s guilt trip.

The Kuri or abbot’s quarters is the first building you see as you enter the temple (image above). 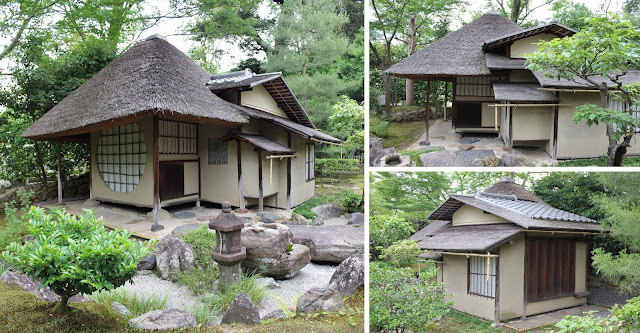 Walking passed the quarters takes visitors to Iho-an or ‘The Cottage of Lingering Fragrance’ (images above). This adorable teahouse is a real treasure! Surely, I thought, it was designed by someone famous, but all we know about Iho-an is that it once belonged to a wealthy merchant and his trophy wife.

Next, the path took me to the famous temple gardens (images above) where pond layout and rock placement were designed by eminent Kobori Enshū. As usual the design is all about imaginary cranes and turtles, which is completely lost on me. Enshū’s name has come up in this blog before in posts about Katsura Rikyū Imperial Villa and Nijō-jō Castle. At first, I thought of this garden as rather plain, but then I realised that Enshū did it on purpose. He didn’t want the garden to take away from the actual star performers here: ‘The Reclining Dragon Corridor’, ‘The Moon Viewing Pavilion’ and ‘The Founder’s Hall’ (Garyoro, Kangetshu-dai and Kaisan-do respectively, images above). The pavilion is in the center of the corridor (image above right). The Founder's Hall is the background building in the images above and it is dedicated to Kodai-ji’s founding priest. It is curious that some of the hall's ceiling is made of the ceilings from Hideyoshi’s boat and Nene’s court carriage. One could call it a commemorative recycling. 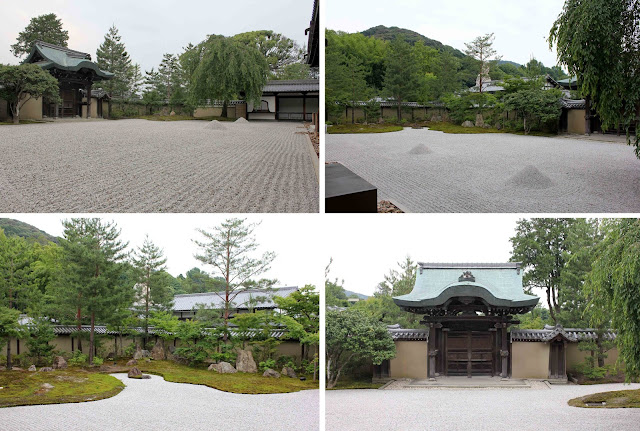 Images above show Hashin-tei a dry garden adjoining the Main Hall or Hōjō. What you see in the images of Hashin-tei here is its “standard look”, but sometimes it features temporary displays. The dragon heads in the image below left are used in a spring display where the bodies of these two large dragons are formed with roof tiles.

The center and right images above show some of the interior of the Main Hall.

After a little climb I saw another teahouse (images above). It was Kasa-tei designed by Sen no Rikyu himself. It is ironic that a temple dedicated to Hideyoshi who ordered Rikyu’s death should feature a teahouse designed by Rikyu. Kasa-tei was formerly known as Ankan-kutsu and has been relocated to Kodai-ji from Fushimi Castle in southern Kyoto.

Above are some images of Kasa-tei’s interior. Unfortunately, I haven’t taken good photos of the umbrella-like roof to which this house owes its name. Kasa-tei is actually one of the two teahouses that are connected by a roofed walkway and form one complex. The other teahouse is called Shigure-tei and it looks so different that I did not recongnise it as such. I thought it’s some sort of storehouse and haven’t taken any photos of it. Apparently, there is yet another teahouse in Kodai-ji called Onigawara-seki, but I don’t know whether it is opened to public.

The descent from the hill was though a beautiful bamboo grove (images above). The presence of a few girls clad in kimono made it quite an enchanting experience.

Images above show a little more of Kodai-ji’s charm.

Finally, a few stone lanterns I spotted in Kodai-ji (images above). Stone lanterns are a peculiar interest of mine. Without doubt, the one on the leftmost image is my favorite probably due to its unusual form and decoration.
Posted by Kigawa at 6:52 PM No comments:

First of this year’s wood-fired pots

I continue to dabble in making bonsai pots, but my output is negligible as usual. It becomes especially obvious when I see hundreds of pots coming out of the kiln (image above) and only two of them are mine (images below).

Images above show two round wood-fired stoneware pots. The one on the left is blue glaze 17 x 8.5 cm and the one on the right is rutile glaze 14.5 x 6 cm.

Images above show another two pots. They are electric kiln stoneware. The one on the left is round, carving and underglaze decoration, celadon glaze, 14 x 5 cm. The one on the right is free-form square with rounded corners, iron oxide and rutile glaze 11 x 3 cm.

These pots are not exceptional, but they are an improvement to the previous lot (see http://lomov.blogspot.com.au/2016/03/first-pots-this-year.html).
Posted by Kigawa at 11:45 PM No comments:

Reference to a hut-style teahouse in Ming China

Teahouse architecture is a recurring theme in my blog and all those posts have been about teahouses in Japan. I’ve never came across of a reference to a ‘teahouse’ in China in its Japanese sense, a rustic free-standing hut. Not anymore. I am reading a book by Craig Clunas about connoisseurship in Ming China. One of his primary sources is a text titled "Treatise on Superfluous Things" written around 1620 by a scholar, painter and garden designer from Suzhou Wen Zhen Heng. This book was a manual for people of means and taste. The first chapter of the book is titled ‘Studios and retreats’ and Clunas translated a small section of it pertaining to teahouses. It reads as follows:

“Build a structure of column’s span, adjacent to a mountain studio, and set therein the tea utensils. Train a boy to the exclusive service of tea, so the whole day may be spent there in pure talk, the chilly night spent in sitting there in a dignified attitude. This is the first priority of the recluse, which cannot be dispensed with.”
According to Clunas, Wen Zhen Heng’s treatise is heavily based on earlier work by two of his contemporaries. One of them is the dramatist Gao Lian who wrote “Eight Discourses on the Art of Living” and the other is Tu Long who wrote "Desultory Remarks on Furnishing the Abode of the Retired Scholar". Clunas tells us that the work of Wen Zhen Heng, Gao Lian and Tu Long is based on even earlier texts dating back to Song dynasty. This means that when Sen no Rikyū was pioneering soan style teahouses at the end of the 16th century in Japan, the practice of doing something very similar was already old in China.

By the way, this topic has a connection to bonsai. Tu Long’s "Desultory Remarks" has an entire chapter on potted plants and Gao Lian’s “Eight Discourses” has chapters on plants and rocks.

The image above shows a Rikyū style teahouse called Kaho-an. It has been reconstructed at Happo-en garden in Tokyo and it dates back to Taisho period.
Posted by Kigawa at 4:05 AM No comments: