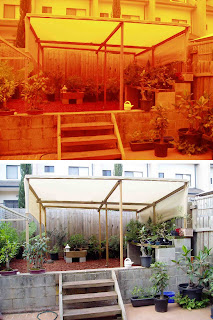 The top image shows my garden this morning during the dust storm and the bottom image shows it this evening after the storm. The new shade cloth frame I erected a few months ago is prominent in these photos.

The pot that I fired yesterday has several cracks and a part of its bottom fell off, but it still holds water and quite functional! I think the initial heating of the kiln was too rapid.
Posted by Kigawa at 4:15 AM No comments:

First firing of my kiln 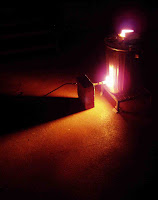 In the last couple of months I have been building a small kiln to fire bonsai pots and tea bowls at home. Last weekend the kiln was completed and tonight I fired it for the first time. The temperature in the kiln went up to 1180 degrees Centigrade in one and a half hours, which was higher than I expected. I could have achieved even a higher temperature, but I had no pyrometric cones for higher temperatures. I'll open the kiln tomorrow morning. I hope the pot is not cracked.
Posted by Kigawa at 5:13 AM No comments:

A Chinese artist once described to his disciples the secret of painting: “Draw a bamboo for ten years, become a bamboo, then forget all about bamboos when you are drawing. Once in a possession of an infallible technique, you place yourself at the mercy of inspiration.”

Bonsai, just like any art has two parts to it: the technique and the creative process. The thing about bonsai is that its technique is way more complex than in most other artistic media. It takes years to acquire the horticultural knowledge and experience necessary for it. Nevertheless, there are enough of bonsai enthusiasts who have the technique. There are also enough artists who are capable of creating exquisite bonsai, but they choose to work in other artistic media. Bonsai masters who possess both the technique and the artistic talent are quite rare.
Posted by Kigawa at 4:11 AM No comments:

"Willows are green and flowers are red" 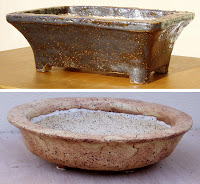 A well known Zen saying tells us: “Willows are green and flowers are red.” It takes each aspect of reality for what it is, and nothing more. I think this is how one should evaluate bonsai. If it is good it will be obvious. If it is not obvious, it is not that good. However, all this doesn’t apply to people who can’t resist liking ugly things.


I recently made a couple of bonsai pots that would convey the feeling of wabi (rustic beauty) and I hope I succeeded to some extent.
Posted by Kigawa at 4:10 AM No comments: 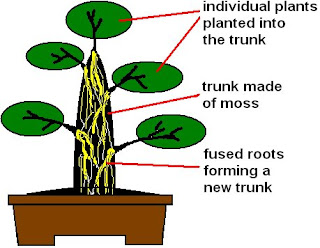 I forgot to mention that at Peter Adams' workshop last week, Ray Nesci showed everyone an amazing technique. He forms a tree trunk out of moss and plants many small plants into it as branches. Plant roots eventually reach the soil at the base of the trunk, while the moss rots away leaving a thick and gnarly trunk formed by the roots. It's awesome!

Posted by Kigawa at 2:41 AM No comments:

Last month I attended this year’s ‘Bonsai by the Harbour’ workshop organized by the Bonsai Federation of Australia. The venue was splendid and most presenters demonstrated advanced techniques. My favorite was Rick Roberts who was styling an evergreen variety of trident maple. It was a tree previously grown in the field with a 15 cm-thick trunk base and 2 cm-thick lower branches. He demonstrated methods for bending thick primary branches (Picture 1) and grafting new roots to an existing nebari (Picture 2 & 3).
Posted by Kigawa at 7:41 PM No comments:

Today, I attended Peter Adams's workshop. He is an unusual bonsai artist and an entertaining speaker. He hasn't performed any 'miracles' with the trees during his demonstrations, but his visions of final tree designs embodied in most excellent sketches were very impressive indeed. The picture here shows a Chinese Juniper he styled, and the sketch of what he wants it to be in the future.
Posted by Kigawa at 4:20 AM No comments:

I was reading Bernard Leach’s “A Potter in Japan” and found a beautiful passage pertaining to Japanese ceramics for the Tea Ceremony: “They [utensils for the Tea Ceremony] … are made in a land of earthquakes where nothing can be built for permanence and the Tea Rooms are like charming human birds’ nests in rock gardens where nature, irregularity, poignancy and brevity hold sway.” It is said so well that I just couldn't resist quoting it here.
Posted by Kigawa at 8:38 PM No comments:

The Exhibition of Bonsai Study Group 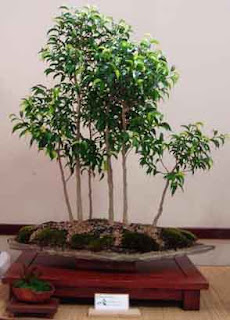 I visited the annual exhibition of Bonsai Study Group today. It is the only Bonsai Club that does their show in autumn. The atmosphere of the exhibition was very nice, a few pleasing trees on display (one of such bonsai is shown in the picture). The demonstration on penjing planting is was interesting too. However, my yearning to see at least one outstanding bonsai wasn’t satisfied. Better luck next time!

Posted by Kigawa at 6:07 AM No comments: 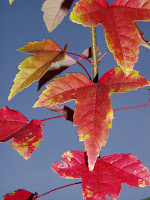 Day by day, autumn is making itself more and more apparent in my little garden. Cold nights almost completely stopped the growth of my bonsai. Recently, while reading Genji Monogatari I stumbled across an interesting remark made by one of the novel’s characters. It goes: “… Nothing is so beautiful as the brilliant dyes spread over the face of Nature, yet the red tints of autumn are often not dyed to a colour so deep as we desire, because of the early drying of the dew, so we say - such is the uncertain fate of this world.” I wonder whether dew really affects the colour of autumn foliage.
Posted by Kigawa at 4:28 AM No comments: 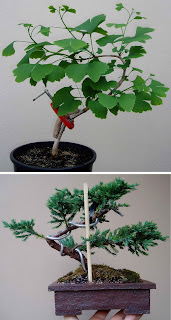 I recently read a book by R. L. Taylor titled Confucianism to learn about this philosophy/religion in general and to find out the extent of Confucian influence on art in particular. As far as art is concerned, Confucians mostly focused on literature, music and calligraphy. However, I came across a passage written by one of the great Confucian teachers of Japan, Kaibara Ekken (1630 - 1714). He wrote: "..., no living creatures such as birds, beasts, insects and fish should be killed wantonly. Not even grass and trees should be cut down out of season. All these are objects of nature's love, having been brought forth by her and nurtured by her." Confucian ideology is deeply rooted in the mentality of East-Asian people and this passage explains why Chinese and Japanese penching/bonsai growers are so particular about pruning, repotting and defoliating their plants only at certain times of the year. Simply not to kill or hurt them wantonly. Another interesting reference to plants in the book is that juniper and Ginkgo trees have long been associated with Confucianism. Typically, the path connecting the main gate of a Confucian Temple to the Hall of Great Accomplishments, which contains the main altar, would boast juniper and Ginkgo trees along with statues of famous Confucians. It is not surprising that these species are so popular in bonsai culture, despite Ginkgo being not really ideal for bonsai cultivation. The picture shows a juniper and Ginkgo from my garden.
Posted by Kigawa at 1:54 AM 1 comment: