My workshop with Naoki Maeoka


I write a bonsai blog, but never mention my bonsai in it. Seems dishonest, but my bonsai collection is quite ordinary and I don’t make it a secret. This time, I have to show one of my trees because it got an unexpected makeover in a workshop with Naoki Maeoka this month (see my blog post about Naoki here http://lomov.blogspot.com.au/2015/11/bonsai-artist-naoki-maeoka.html). First, a quick rundown on this tree's prior history. It is a Lebanese Cedar (Cedrus libani). I bought it as a five-year-old starter stock plant from a bonsai nursery in 2007 (leftmost image below). By the end of 2008 I made a number of severe bends to its trunk (image below). In 2012, its growth was stunned by the grubs of the Punctate Flower Chafer (see my blog post about this pest here http://lomov.blogspot.com.au/2012/04/pest-of-month-punctate-flower-chafer.html). Believe it or not, the pot in the image marked ‘2012’ contained 24 fully grown grubs of this beetle. The rightmost image shows how this tree looked like last month. To be frank, I neglected it for the past couple of years.

This month, I took this tree to the workshop with Naoki and the leftmost image below shows it after the workshop. I must say, it was an unexpected outcome. The centre image below shows this tree digitally re-potted. The angle of the trunk is different and the foliage pad is adjusted accordingly. The tree is planted in a nanban style pot made by me specifically for this tree. The pot is slightly too big, but at this stage, I am not willing to reduce the root system any further. The rightmost image shows my impression of the tree’s future look.

Posted by Kigawa at 4:58 AM No comments:


My 2012 visit to Kyoto was packed with cultural experiences, but at the end of it, I had only one regret - I haven’t gone to Daitoku-ji. So, when I got my first day-off during my bonsai residency in Osaka last year, I knew where to go. When I finally got there, I discovered that Daitoku-ji is not a temple, but a complex of 23 temples. I also found that only a few of them are opened to public. The first temple I happened to walk into was Ryōgen-in.

Image above left is the temple’s main gate. The centre image above shows Ryōgen-in’s Hojo or abbot’s residence as you approach it from the entrance gate. Hojo has been built in 1502 and it still remains in its original form. It is believed to be the oldest building in Daitoku-ji precinct. Looking at the photos I took at Ryōgen-in made me confused. I couldn’t understand what is what and where the things were in relation to each-other, so I ended up making a map and unlike other existing maps mine is relatively complete and in English (image below). You can refer to this map as you read this post. 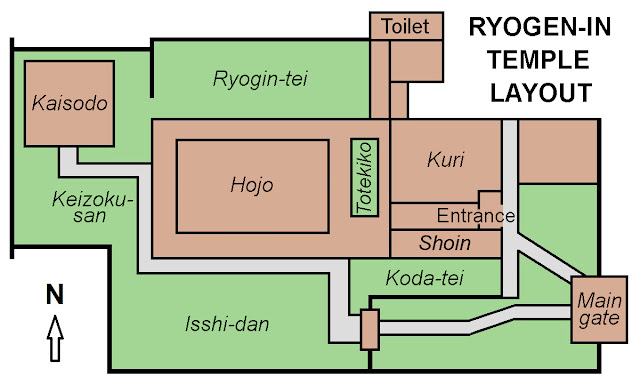 Now I could clearly see that Hojo is surrounded by four gardens on the south, east and north sides. The first I saw was Koda-tei (images below). It runs along the eaves of the study or Shoin on Hojo’s east side.

Koda-tei is narrow and long and it has been named after a river that runs near the temple in China where the founder of Rinzai sect came from. The river here is an allegory for the uninterrupted transmission of Rinzai sect’s ideas. This dry garden is also sometimes called A-un no Seki-tei. The meaning of this name is roughly “The garden of alpha and omega stones” because “A” and “Un” are first and last letters of Japanese alphabet. By the way, the two stones that represent “A” and “Un” were brought from Toyotomi Hideyoshi’s Jurakudai residence.

Further along the south side of Hojo building there is a sudden change of scenery (image above). It is Isshi-dan, a Hōrai-san style garden (image above and images below). In the image above, the tallest group of rocks in the middle represents mythical Mount Penglai or Hōrai-san in Japanese. This is where eight Taoist immortals meet for their elixir of immortality drinking parties. Needless to say, these events are by invitation only and the venue is secret. The group of rocks in the right corner represents ‘The Island of Cranes’ or Turushima, while the group of rocks surrounded by a halo of moss represents ‘The Turtle Island’ or Kameshima. The latter was created only in 1980 to replace a seven hundred year old camellia tree.

All colours in the garden are natural and subdued (image above left), but the diversity of colours and textures doesn’t allow the viewer to get bored (image above right). Apparently, Isshi-dan’s name was inspired by a comment about the chambers of Ryōgen-in’s founder. His teacher called them “Ryozen isshi no ken”, which means ‘House of the single branch on Vulture Peak’. Was it a compliment?

The west side of Hojo is has a small moss garden called Keizokusan. It is sort of indistinct and I missed it altogether. A tiny bit of it can be seen in the bottom left corner of the center image above. The main subject of this image is Kaisodō and I am not sure about the function of this building.

The north side of Hojo features Ryogin-tei, a Shumisen style garden, which is attributed to Sōami and believed to be the oldest in Daitoku-ji (images above). Apparently, it has been maintained in its original form for the past five centuries. The garden consists of several groups of rocks surrounded by a continuous sheet of moss. The tallest group in the center is supposed to represent mythical Mount Meru (aka Shumisen). It is a sacred mountain in Hindu and Buddhist cosmology, which is considered to be the center of all universes. Others interpret the center group of rocks as the Buddhist triad (san-zon-seki) representing three Buddhist deities whose identities vary according to different traditions. 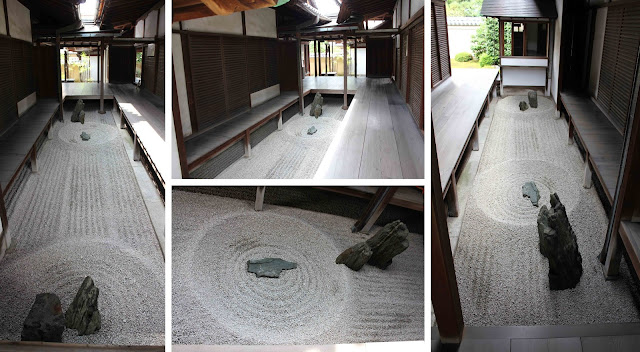 Totekiko (images above) is a courtyard garden jammed between Hojo and the kitchen section or Kuri. It is often named as the smallest rock garden in Japan, but I seriously doubt that. It was built only in 1960 by a well-known garden historian and designer Nabeshima Gakusho. It supposed to illustrate a Zen kōan: “The harder a stone is thrown in, the bigger the ripples”. Despite of its relatively young age Totekiko has become one of the most recognizable icons of Japan. To me, it seemed like a bird’s eye view of a landscape glimpsed through a portal in the floor. Almost magic!

So far, I was talking about the gardens of Ryōgen-in. Now, more about the Hojo building itself. Images above show some of its exterior features, while the image below is a schematic layout of it. Again, I had to make an English version of it myself. 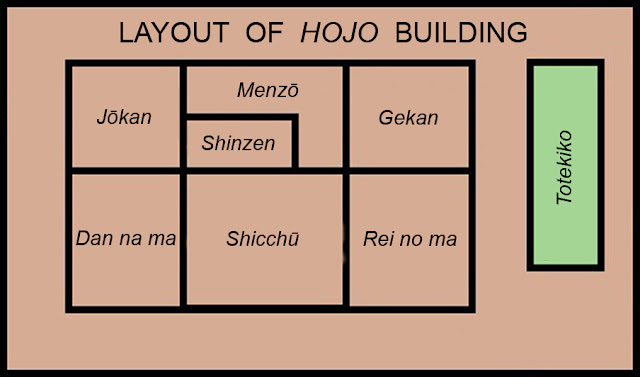 The layout helped to figure out which room I was looking at in my photos.

The image above left shows Rei no ma. The name of this room has been translated as “The Courtesy Room” and I understood its function as a group activities room. This is where monks would hold tea and incense ceremonies (sarei and kōrei). The image above right shows Dan na ma. A Japanese friend explained to me that it functioned as a reception room for special guests, especially those who make large donations to the temple. See the Hojo layout for room locations.

The image above left shows the alcove or tokonoma of the study or Shoin (see the temple map above for its location). Apparently, at one point Toyotomi Hideyoshi and Tokugawa Ieyasu played a game of chess in that very room and being there made me feel awestruck. The image above centre shows Shicchū. The name of this room has been translated as ‘The Zen Practice Room’ and it functioned as the assembly hall or a lecture theatre. The image above right shows Gekan. It is translated as ‘The Lower Room’. It is also called Shoin no ma which means ‘The Study’. One other name of this room is Kokutsu or ‘The Fox Den’. It was used for receiving important guests.

I would like to finish this post with some images of calligraphy displayed around Hojo building (images below).

I was spellbound by Ryōgen-in’s elegance and the glamor of its history.
Posted by Kigawa at 5:06 AM No comments: