Pest of the month: The Giant Conifer Aphid

I found the first one on a Japanese Black Pine (Pinus thunbergii) while pulling out old needles. It turned out to be the Giant Conifer Aphid (Cinara piniformosana, Japanese: matsu-oo-aburamushi). Image 'A' shows this aphid after it’s been soaked in acid and squashed for examination under the microscope. When alive, it’s blackish-brown dusted with grey and can be with or without wings. Japanese Black and Red Pines are its main host plants. In spring, you may find this aphid near the bases of new candles. Later in the year, they move on to one or two-year-old branches (exactly where I found it). They pierce needles and stems of the pine with their stiletto-shaped mouth parts and feed on pine sap (what a treat!). This aphid is native to the Far East and so far has been introduced only to Brazil.


I fully understand that blog posts like this amuse only myself and are dreadfully boring to everyone else. So, here is something to make it a little more bearable. On one of the cloudy days at Fujikawa Kouka-en, this gorgeous damselfly flew into our workshop (see images below). It’s the Haguro Damselfly (Atrocalopteryx atrata, Japanese: haguro tonbo). It preys on aphids among other insects, so it’s beautiful and beneficial to bonsai trees.

Posted by Kigawa at 2:17 AM No comments:

Pest of the month: Citrus Longicorn

Last month in Osaka, I became a fan of yakitori food. One of my visits to a yakitori restaurant was rewarded with an unexpected find. As I was entering the restaurant with my friends, I saw a perfect specimen of a longicorn beetle (image above left). Back in Sydney, I identified the specimen as Citrus Longicorn (Anoplophora chinensis) also known in Japan as gomadara-kamikiri.

What is the connection to bonsai? Just a couple of things. This beetle is a serious pest of many woody plants and it has been repeatedly found in bonsai trees imported to the United States from China and Korea. Apparently, it has also been introduced to the UK. The larva of this beetle (image above right) is a timber borer and its host plants include some of the most popular species used for bonsai. They include maples, elms, Citrus species, kumquat, Casuarina, Hibiscus, willows, pear, plum, apple, plane trees, Cotoneaster, birches, beech, poplars, Japanese Red Cedar, crepe myrtle, Ficus species and many others. If your bonsai tree is infested with a single larva of this beetle you are likely to loose a significant amount of wood in the trunk. To get rid of it you have to open one of the tunnels in the trunk and inject pest oil into it to kill the larva. So far, Citrus Longicorn hasn’t been introduced to Australia.
Posted by Kigawa at 5:41 AM No comments: 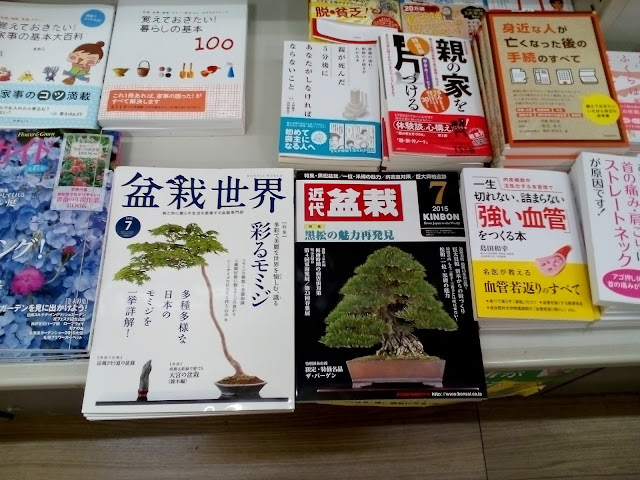 Japan has a lot more to offer to a scholarly minded student of bonsai. To be fair, they had bonsai introduced to them a thousand years ago, while we got it from Japan “only yesterday” (get the pun?). Consequently, their bonsai has a long history and a weighty cultural context. The image above shows this month’s issues of ‘Bonsai Seki’ and ‘Kinbon’ magazines on the shelf of a regular book store in Osaka. In Sydney, such store would be considered small, however even the largest book store in Australia wouldn’t have a single bonsai magazine.
Posted by Kigawa at 7:39 PM No comments:

Pest of the month: The Pine Oribatid 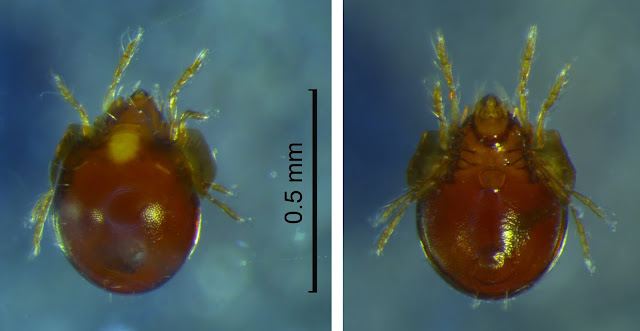 During my residence at Fujikawa Kouka-en I was told of a pest mite regularly found on pine bonsai. With the help of my teacher I got hold of a specimen. Back in Sydney, armed with a microscope, thick books and the Internet, I managed to identify it as the Pine Oribatid (Diapterobates humeralis). It’s an arboreal mite that feeds on decaying plant tissues, fungi, algae, and lichens in coniferous forests. For what it’s worth it “cleans” the tree bark off fungi, algae, and lichens. It also feeds on silk filaments enveloping the eggs of woolly conifer aphids (see my blog post about a similar aphid here http://lomov.blogspot.com.au/2013/10/pest-of-month-asian-woolly-hackberry.html). By doing that it dislodges the eggs and exposes them to the elements and the natural predators such as ants and spiders. This means that the Pine Oribatid is not a pest, but one of the good guys!
Posted by Kigawa at 4:22 AM No comments: