This post continues my blog’s ‘Asian performing arts theme’. I do it in a 'bonsai blog' just because I want to. I love traditional Indian theatre with my absolute favourite being Kathakali. While living in South India I got to see it only once. So, when I found that a similar south Indian dance-drama called Yakshagana will be performed in Sydney, I felt lucky. Yakshagana is less stylised and more folksy than Kathakali, which makes it is easier to understand for an outsider. Apparently, Yakshagana appeared as a distinct art form as early as the 15th century and currently exists in various styles across all south Indian states. This particular show was performed by Yakshagana Kendra theatre from Udupi, Karnataka. The performance consisted of two plays – ‘Jatayu Moksha’ a story from the epic Ramayana and ‘Nala Karkotaka’ a story from the epic Mahabharatha. All performers were of high calibre. The musicians were good. The singer, who in a way narrated the story, had an incredibly powerful voice. The costumes were stunning (see images below). The actor’s movements were precise and graceful, their acting was believable and poignant.  All this combined created an overwhelming feast for my eyes and ears. 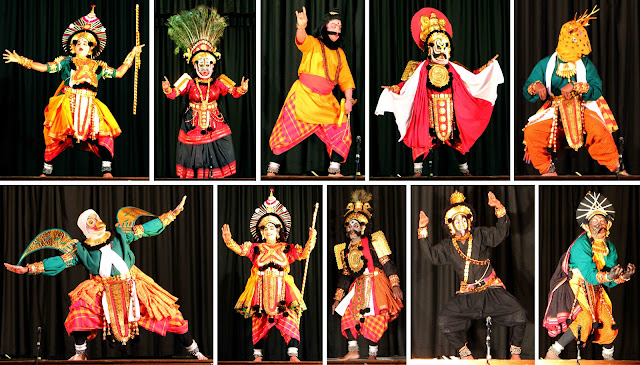 Posted by Kigawa at 4:30 AM No comments:

Pest of the month: snails and slugs

Some of the most annoying pests in my garden are snails and slugs. Sure enough they damage bonsai (seedlings, young shoots), but the most disappointing incidents relate to accent plants. Before an orchid is about to bloom, they would chew through the base of the inflorescence stalk. They would eat an entire pebble plant (Lithops sp.), and they would cause severe damage to my carnivorous plants (Sarracenia and Venus Flytrap). The culprits are two species the Common Garden Snail (Helix aspersa, image above left) and the Leopard Slug (Limax maximus, image above right). Both species were introduced to Australia from Europe. An interesting thing about the Leopard Slug is that a stretched body of a fully grown individual can be upto 20 cm long. Control of snails and slugs is very easy – snail pellets sold in most garden centers and hardware stores.

Posted by Kigawa at 8:11 PM No comments:

Not a pest of the month: praying mantises

Praying mantises in your garden is good news for your bonsai. Bonsai are small plants, which makes them more vulnerable to attacks by herbivorous insects. In the invertebrate community of your garden, praying mantises are alpha predators standing at the top of the food chain. Their presence indicates a healthy and functional ecosystem. Mantises mostly prey on herbivorous insects, which means fewer herbivores damage your bonsai. Garden Mantis and False Garden Mantis are not the only mantis species I’ve seen in my backyard. Below are images of two other species I have seen in the past. The left image shows the Purple-winged Mantis (Tenodera australasiae) probably the largest species in Sydney area (adults 10 cm long). The right image shows a very small species Kongobatha diademata (2 cm long).