Kōrin-in is one of those temples that are closed to visitors most of the time. Fortunately, my visit to Daitoku-ji coincided with the time when its doors were open to public. The temple is impressive, but there is not a lot of information about it at ones fingertips. Luckily, Gregory Levine’s book titled “Daitokuji: The Visual Cultures of a Zen Monastery” shed some light on the temple’s history. Kōrin-in had begun its existence around 1520 as a family mortuary for the daimyo of Noto Prefecture.

Its founding abbot Shōkei Jōfu was one of Daitoku-ji’s most venerated monks. Following his death in 1536, Kōrin-in begun to function as his mausoleum. At the end of the 16th century the temple transitioned to a mortuary site for the Maeda clan and by the beginning of the 17th century became a regular urban temple. During the Meiji period (1868-1912) it even functioned as a hospital before being marketed as Ryōshō-ji. The original Ryōshō-ji site was destroyed, but Daitoku-ji leadership needed to maintain the Ryōshō-ji brand and Kōrin-in was a conveniently available surrogate for it. Once the new Ryōshō-ji was reconstructed in 1932, Kōrin-in was reverted to being Kōrin-in again.

It wasn’t the only swindle in Kōrin-in’s history. I should mention that the temple remained Shōkei Jōfu’s mausoleum throughout its existance. However, in 1998 it’s been discovered that one of Kōrin-in’s main relics, a statue venerated as the depiction of the temple’s founder Shōkei Jōfu was originally a portrait of Ten’yū Jōkō, the founding abbot of now extinct Baigan-an temple. This is especially baffling because Ten’yū was a prominent figure affiliated with Daitoku-ji’s Northern faction (Daisen-in temple), while Kōrin-in’s founder Jōfu belonged to the Southern faction (Ryōgen-in temple). Here goes my idea of Daitoku-ji as one big happy family. The displacement of this statue probably happened during the first years of Meiji period (following 1868) when things got out of control due to the movement to abolish Buddhism and make Shintō the state religion. Korin-in’s Abbot’s Quarters building or hōjō has been constructed between 1533 and 1552 making it one of oldest extant buildings of its kind. The building is executed in Muromachi style and goes well with Daitoku-ji’s overall character. Sliding door panels divide its interior into eight rooms floored with tatami (see images above). The building served various ritual, social and residential functions. The alter room (butsuma) with the adjacent chapel (shit-shū) situated at the core of the building weren't open for viewing. Apparently, the alter room is dominated by the portrait of Shōkei Jōfu and the “Jōfu/Ten’yū” statue mentioned above. By the way, the leftmost image above shows the oldest extant example of tokonoma alcove in Japan.

Temple gardens are always my primary interest, but I haven't been able to find any substantial information about Kōrin-in’s gardens. Apparently, the dry garden along the southern side of hōjō (images above) represents the idea of paradise according to Chinese mythology with its rocks and azaleas symbolising mountains. One of the trees in this garden is said to represent the “Baidara” tree whose leaves were used for writing Buddhist scripture in ancient India. Those Indian manuscripts were actually made of palm leaves and the Japanese word “Baidara” may have originated from the Sanskrit word “patra” which means writing sheets made of palm leaf.

Hōjō’s eastern side overlooks a moss garden (images above). I found no information about its symbology. Its design features a wavy strip of bare ground. I would like to know what it represents. May be a river?

Northern side of hōjō faces Kankyo-tei teahouse surrounded by a tea garden (see images above). Apparently, Kankyo-tei’s name comes from a poem by tea master Furuta Oribe (1544-1615) and it roughly translates as “solitude tea hut”. Its design is a copy of famous Hassō-an teahouse designed by tea master Kobori Enshū (1579-1647). 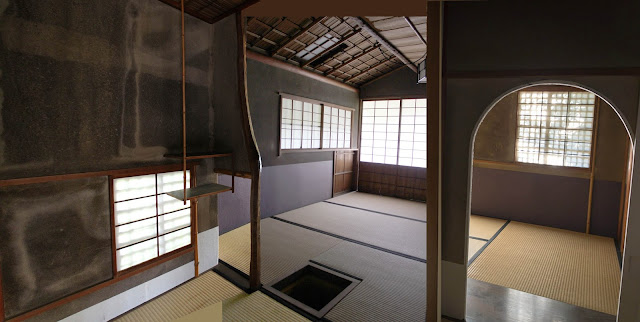 Above is a composite image of Kankyo-tei’s interior. Hassō-an and Kankyo-tei follow a design called hassōnoseki or "eight-windowed [room]". This design is attributed to Furuta Oribe who was Enshū's teacher. The innovation of this design was more windows at varying heights (see the image above), especially around temae-za (the place of the host). This created a “spotlight” effect on the host performing the ceremony, which could be perceived as vane. On the other hand, it made the ceremony more fun to watch, which could be perceived as being attentive to guests. Tea master Sen Rikyū (1522-1591) liked it dark and austere in line with the aesthetic principles of Zen, while Oribe liked it to be less severe and more fun. I can see the merits in both views.

Images above show a little more of Kōrin-in. The leftmost image shows a small shrine at the North-east corner of hōjō. Center image shows a walkway leading from one of the temple’s buildings to hōjō. Rightmost image shows a courtyard garden with stepping stones. Images below show little things here and there that caught my eye.

I am really glad Kōrin-in was open on that summer day, last year.
Posted by Kigawa at 5:35 AM No comments:

The last wood-firing of the year


The wood-firing a fortnight ago was as uneventful as all others this year, probably due to a token participation on my part. It’s like a lottery you see, many tickets are a better chance to win. Many pots in the kiln are a better chance of getting one that’s beautiful and unique. My pots this year were just passable. Two of them from the last wood-firing are shown below.

Posted by Kigawa at 2:21 AM No comments: 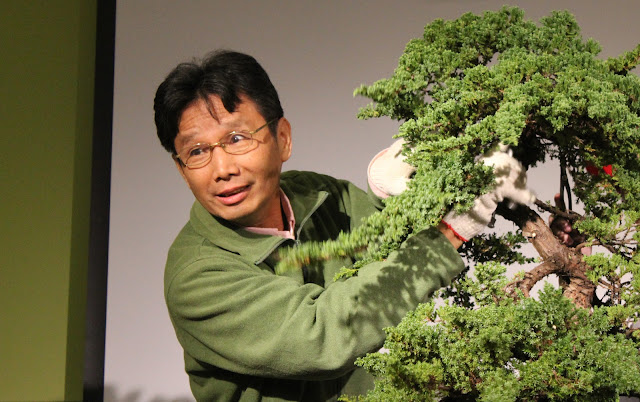 Another winter is over and it's time for another ‘Tops Weekend’, the annual event held in Sydney by the Illawarra Bonsai Society. You can see my blog posts about some of the previous guest demonstrators at 'The Tops' here: Marc Nöelanders, Robert Steven, Steve Tolley. This year’s guest demonstrator was Min Hsuan Lo from Taiwan. This wasn’t his “first rodeo” in Australia. A couple of years ago he demonstrated at the National Bonsai Convention in Perth. The feedback about him at that time was good and I was especially curious about his demonstration at the Tops.

During the workshop on Saturday morning, I noticed that in some instances Lo made unorthodox decisions. This observation was confirmed during the Saturday night demonstration. The material Lo chose for the demo was a Juniper which was achingly suitable for an informal upright design (see images below). Previously, Marc Nöelanders and Mauro Stemberger worked with very similar material from the same source and produced almost identical informal upright results. I was bracing myself for another one just like it, when Lo told us that he hasn’t decided what style it’s going to be, but it not going to be informal upright.

Lo explained his intention with a joke. He said that he feels like a school boy facing typically boring expectations from his farther and it would be almost common sense for the boy to defy such expectations and do the opposite. I think Lo wanted to do something unconventional to stimulate our “artistic muscles” and to show the audience the world of artistic freedom where “left-back-and-right-makes-informal-upright” stereotype is just a small piece of a puzzle. You can see the final result of the demonstration in the right hand image below. It is not influenced by the Japanese conventions. There is potential for future elegance and balance in the design. It is unrefined and unfinished, but I could see the beginning of a tree with individuality and a degree of uniqueness.

In a week since “The Tops” I heard a rumour that “some people didn’t get him”.  Lo spoke with a heavy accent and I could see the audience struggling to understand him. I spent years working in Penang where everyone spoke Lo’s native dialect (Hokkien Chinese). Understanding him was "a walk in the park” for me. He was very relaxed, spent a third of his demonstration talking with lots of humour and at the end he produced something that got my attention. So, I like him.
Posted by Kigawa at 4:37 PM No comments:

My workshop with Naoki Maeoka


I write a bonsai blog, but never mention my bonsai in it. Seems dishonest, but my bonsai collection is quite ordinary and I don’t make it a secret. This time, I have to show one of my trees because it got an unexpected makeover in a workshop with Naoki Maeoka this month (see my blog post about Naoki here http://lomov.blogspot.com.au/2015/11/bonsai-artist-naoki-maeoka.html). First, a quick rundown on this tree's prior history. It is a Lebanese Cedar (Cedrus libani). I bought it as a five-year-old starter stock plant from a bonsai nursery in 2007 (leftmost image below). By the end of 2008 I made a number of severe bends to its trunk (image below). In 2012, its growth was stunned by the grubs of the Punctate Flower Chafer (see my blog post about this pest here http://lomov.blogspot.com.au/2012/04/pest-of-month-punctate-flower-chafer.html). Believe it or not, the pot in the image marked ‘2012’ contained 24 fully grown grubs of this beetle. The rightmost image shows how this tree looked like last month. To be frank, I neglected it for the past couple of years.

This month, I took this tree to the workshop with Naoki and the leftmost image below shows it after the workshop. I must say, it was an unexpected outcome. The centre image below shows this tree digitally re-potted. The angle of the trunk is different and the foliage pad is adjusted accordingly. The tree is planted in a nanban style pot made by me specifically for this tree. The pot is slightly too big, but at this stage, I am not willing to reduce the root system any further. The rightmost image shows my impression of the tree’s future look.

Posted by Kigawa at 4:58 AM No comments: