Tsubo niwa on a shoe string

Six years ago, I moved into a townhouse with a small backyard and that allowed me to take up bonsai. Now, I live elsewhere, but in this post I would like to pay a little tribute to that tiny piece of land.


Just months before the house was sold my daughter asked me to make a little Japanese garden. The available space was enough to create a tsubo niwa, a courtyard garden the size of one tsubo (3.3 m2). The idea grew on me and after a while I decided to do it as a challenge. I usually hoard found objects in hope of using them in the garden one day. If I could come up with a garden design incorporating all those found objects, the garden would be inexpensive. Soon I had a plan shown in the drawing below. 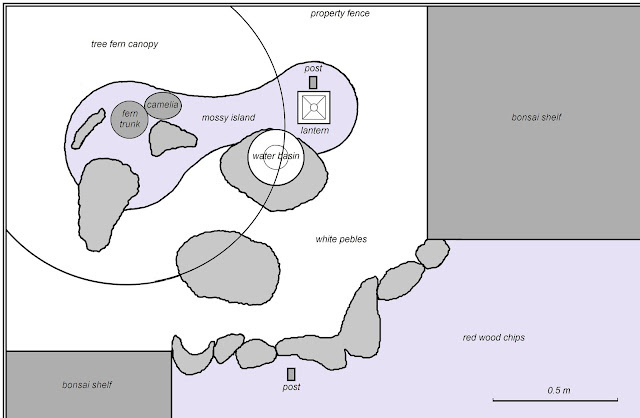 The design had to take in to account several considerations:

a) It had to fit into a 2 x 1.5 m plot (coincidently about one tsubo in area).
b) It had to use existing plants, preferably without transplanting them.
c) It had to make maximum use of found objects (which included artificial rock made of polyurethane).
d) It had to incorporate two existing posts supporting overhead irrigation system.
e) It had to have a barrier preventing my dog from entering it.

Now you understand why I considered this design a challenge. Below is a step-by-step rundown of how it all happened.

1 – The area before any work began.
2 – The ground is cleared and sprayed with a weedicide. Two existing plants a tree fern and a camellia are left as they were.
3 – The fence is lined with reed screen. The ground is covered with weed cloth. The artificial rocks are laid out to form garden boundary. The fronds of tree fern had to be removed because of the skin irritation they cause.
4 – Pieces of ceramic pipe, bricks and artificial rocks are arranged to form a retaining wall. This wall will form the boundary of a mossy island surrounded by white pebbles.
5 – The island is filled with soil mix.

6 – Stone lantern and a flat rock in front of it are set in place. The top part of the
lantern (spire, roof and firebox) was a found object, but the bottom (firebox platform and post) was carved by me out of hebel. I made it to resemble Oribe style lantern.
7 – The top of the retaining wall is raised higher and shaped with clay. The island is toped up with more soil mix.
8 – Moss is planted on the island surface. All moss was collected in my backyard.
9 – Unwanted rocks and ceramic pieces are laid out to reduce the amount of pebbles to be used in the garden.
10 – The garden is filled with white pebbles and another stepping stone is set in front of the lantern. Timber post at the back is wrapped with reed screen to blend with the background. The timber post at the front is replaced with a thin copper pipe to make it less noticeable. I inserted a steel rod inside the pipe to give it structural strength. This copper pipe is also a part of a fence formed by a very thin wire to prevent my dog from entering the garden.

11 – Artificial rocks forming the garden boundary are rearranged to reduce the area of the garden.
12 – The tree fern with its first new leaf.
13-14 – The tree fern with its first flush of new leaves. A ceramic mask (made by me) is hung to conceal the junction between the timber structure and the top end of the copper pipe.
15 – The base of the copper pipe post is concealed by a rock. A ceramic water basin (made by me) is set in front of the lantern. I meant to reduce the basin's height and place it closer to the lantern, but the house was sold by then.

I had a score of ideas for improving and refining this garden, but it wasn't mine any more. It fulfilled its primary function though - it made my daughter happy. In fact, she could see the garden from her room without even getting out of bed. Image below left shows the intended angle for viewing the garden. Image below right shows the garden in the context of the backyard.

You might say this garden looks a little tacky, but can you do better for less than $200?
Posted by Kigawa at 8:52 AM

The garden is beautiful- you've inspired me to do something similar. Well done on getting it all done for $200!
Maddie

I technique the design process as a collaborative experience, taking inspiration and support from you by managing your objectives with your budget, as well as making design options that indicate the exclusive conditions exclusive to your garden site.