Last month, I was pruning and wiring an African Olive tree and noticed a profusion of tiny scale insects on its leaves (image A). What you see on the leaves is not the actual insect, but the waxy secretion which serves as a protective shell (image B). You need to flip the scale over to expose the soft and vulnerable body of the insect (image C). To identify the species of a scale insect one must prepare a microscope slide, which usually takes a couple of days. Once the slide is prepared the insect looks as shown on image D. In this case, it turned out to be California Red Scale (Aonidiella aurantii). It is better known as an economically important pest of citrus. To control the infestation of such scale insects, I prefer to spray the pant with a systemic insecticide. If the problem persists spray it again according to instructions on the label.


I have noticed something curious about California Red Scale. Its rear end shown by the arrow in image D has peculiar structures, which look like windswept bonsai (see the image below). 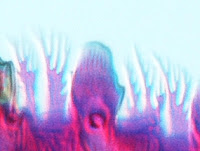 Contact safe pest control today, Sydney's leading Pest specialists for over a decade. We handle all Residential and Commercial projects with environmentally, eco-friendly and pet friendly control solutions, fully insured and offer a 6 Month guarantee to all our customers.

Worried about pests in your home or establishment? safe pest control uses latest technology and state-of-the-art methods in order to exterminate and prevent pests from causing problems With our services so convenient and affordable, there’s no reason to take such risks.