Pest of the month: The Pine Moth 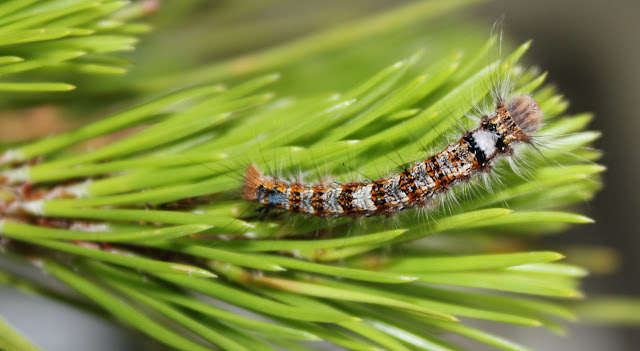 I spent the last month learning bonsai at the Fujikawa Kouka-en in Osaka. During that time, those who worked at the nursery kept spotting hairy caterpillars feeding on Japanese Black Pine needles (see the image above). I put one of them in a vial with alcohol to identify it later. Back in my Sydney lab, I set to the task. A copy of “Illustrated Insect Larvae of Japan” published in 1962 was just the book to solve my mystery. It happened to be a caterpillar of the Pine Moth (Denrolimus spectabilis) also known in Japan as matsugahera. Its caterpillars feed on pines, mainly Japanese Red Pine (Pinus densiflora) and Japanese Black Pine (P. thunbergii). Young caterpillars prefer needles of the current year, but older ones prefer one-year-old needles. Although this pest is not known to kill trees, it can seriously weaken a pine bonsai when it is de-candled and has all old needles removed. In Japan, it can complete a couple of life cycles per year, so caterpillars appear only once or twice a year. Australian bonsai growers can relax about the Pine Moth, because it is currently found only in China, Japan and Korea.


Incidentally, this pest is one of the main reasons why the Japanese tie little straw mats around pine tree trunks. They call these mats mushi taji, fuyugakoi or komomaki and I published a blog post about it a few years ago (you can read it here http://lomov.blogspot.com.au/2011/05/mushi-taji.html).
Posted by Kigawa at 3:56 AM