Last weekend, I attended a couple of bonsai demonstrations by Peter Adams from America. He is great at painting bonsai trees and sketching different design options for trees. He has an acute artistic sense and a refined taste for bonsai and bonsai pots. He is trained as a professional artist and his abilities would be rather common in the artistic circles. However, they are rather rare in the bonsai community and he takes full advantage of it. Below, are Peter’s drawings of three different design options for a particular tree. 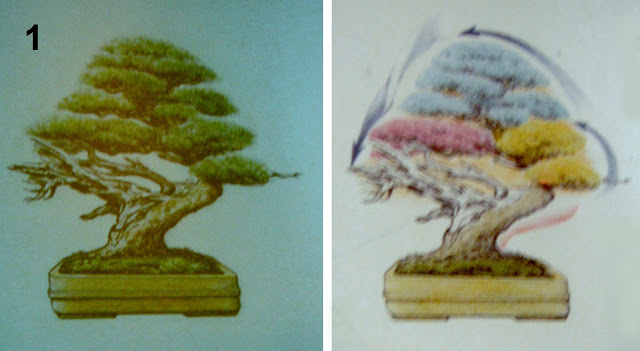 He can be a harsh critic of something when he speaks in generalities and at the same time hypocritically mellow in his opinions when it comes to specifics. For example, he would look at a mediocre tree and say it is wonderful not to offend the owner. I know that they call it good people skills, but it made some people in the audience think that mediocre trees are wonderful.


He had a career of growing bonsai, which allowed him to accumulate a wealth of horticultural knowledge. Sharing it with the audience was good learning.


The organisers of these demonstrations provided him with the world class bonsai material, however a tree with a tremendous potential is not always the best candidate for a spectacular demonstration. Therefore, there were no amazing transformations. Below, are the before and after pictures of the tree, which is the subject of the three design options drawings shown above.

Peter Adams also showed us some photos of his bonsai collection in the US and I was a bit disappointed. The trees were decent, but none of them had the ‘wow’ factor.


Overall, I did learn quite a few things and it was well worth it.

For a blog post about Peter Adams' demonstration in Sydney in 2009 go to: http://lomov.blogspot.com.au/2009/07/peter-adams-workshop.html
Posted by Kigawa at 4:10 AM

Good blog you have got here.. It's hard to find high-quality writing
like yours these days. I seriously appreciate individuals like
you! Take care!!