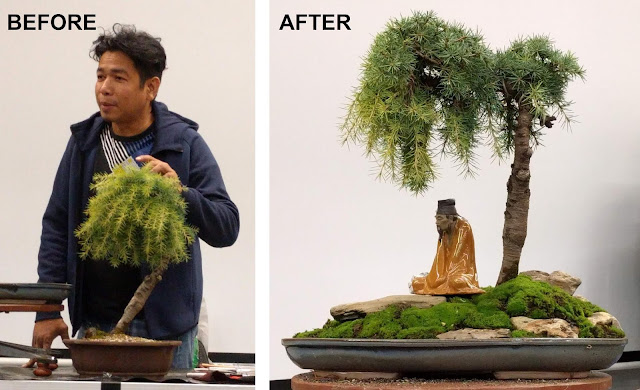 Last weekend I attended a demonstration by a Pilipino bonsai artist Juan Llaga at the Tops Weekend organised by the Illawarra Bonsai Society. As always, I really enjoyed the event, but was mildly disappointed by this year’s international demonstrator.

Images above show ‘before and after’ of the first part of his demonstration. I honestly couldn’t see the point of it. He could have used a miniature umbrella instead of a tree to achieve the same effect.

Images below show ‘before and after’ of the second and main part of his demonstration. The forest planting assembled by Juan lacks cohesion and falls short in the following areas:
-       sub-optimal arrangement of trees in terms of their height;
-       inconsistent angles at which the trees are planted;
-       thoughtless branch arrangement;
-       unnecessary and repetitive jins. 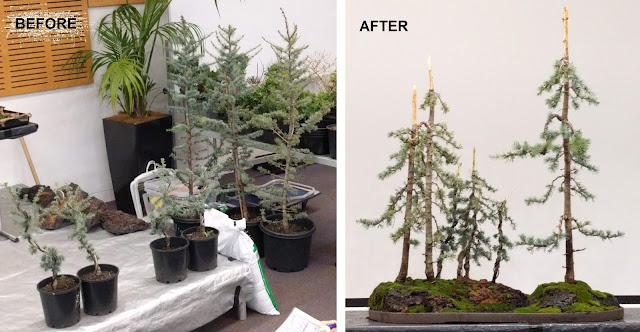 In the week following the demonstration, I came across something written by Ming dynasty scholar Shih T'ao. He wrote about painting trees: "The ancients were in the habit of representing trees in groups of three, five, nine or ten. They painted them in their various aspects, each according to its distinctive appearance; they blended the uneven heights of their silhouettes into a living, harmonious whole. I like painting pines, cedars, old acacias and junipers, often in groups of three of five. Like heroes performing a war dance, they display a wide variety of attitudes and gestures; some lower their heads, others raise them; some double up on themselves, others point straight and boldly upward." This passage reminded about the weaknesses in Juan Llaga's forest planting composition.
Posted by Kigawa at 4:58 AM

Roku.com/link and it’s easy. Collect Roku com link enter code as the initial step. Sign in to Roku account and move to the Player section. Note the code and you can receive a prompt to enter the code. For Roku.com/link activation guide, use the contact number available on our webpage. Wait for the agents to respond back
If you end up with errors as you proceed with the process, check the page Roku.com/link and verify the channel activation steps
Activate and enjoy streaming

Roku device is a ultra streaming player that helps people in enjoying effortless live videos. You need to use Roku com link to verify the Roku activation code, after which you can start streaming your favorite content.

Garmin Express is an outstanding application software which is used to watch the working and monitor devices on your computer. It can also be used for registration of a new product, to store all the fitness data, synchronization of remote device data, and everything else concerned. For Garmin express check the about section in settings.

WAO the amazing collection for Men’s at low price and fast tracking | Genuine Animal Skins Jackets at Mr.Styles. The explosive growth of the Internet makes it easier than ever to shop for an amazing assortment of products from around the world. When you're shopping online you have to be sure that you know who you're buying from.Do you want to buy a fashion jacket for men but worry about quality and size’s? Then visit the mr-styles.com its have 1000+cowhide leather jackets at affordable price with FREE SHIPPING and 30 Days FREE RETURNS / EXCHANGE options to the buyer. Buyer can also choose thebest winter jackets for men or Shearling bomber leather jackets at low cost that we are offering at our Store. With the coupon code : Yepie10 you can buyharley davidson leather jacket men, dauntless leather jacket, superhero leather jackets, leather varsity jacket mens and leather bomber jacket mens with free worldwide shipping and 10% Flat Discount